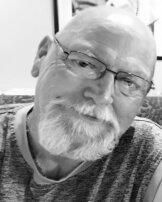 He was born in Odessa, Texas on September 04, 1949 to parents Lewis Hatfield and Pearl Bay Cates. He attended West Texas Boys Ranch as a young man and was a high school graduate. He married Tommie Elaine McCorcle on February 15, 1980. They moved to Iraan the same year and Jerry was employed for Marathon Oil Company for 25 years.

Jerry Hatfield is preceded in death by his father, Lewis Hatfield and his mother Pearl Bay Cates and his brother Richard Hatfield. He is survived by his wife, Tommie Hatfield, his two sisters, Sandra Hedger and Pam Craig. One child, Jeremy Hatfield and two step-children, Peggy Quilodran-Owen and Robby Quilodran. He is also survived by six grandchildren, Lauren, Caiti, Robby Jay, Micah, Jatlyn, and Bella and two great grandchildren, Ollie and Ezekiel. Jerry is also survived by many nieces and nephews.

A viewing will be held on Friday, June 15th from 9:00am to 11:00am at Iraan Civic Center, 9279 Alley Oop Lane, Iraan, Texas. The funeral service will follow at 2pm at the Civic Center. Jerry will be interred at Restland Cemetery on Highway 349 west of Iraan.
To order memorial trees or send flowers to the family in memory of Jerry Hatfield, please visit our flower store.