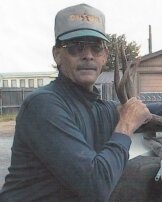 The family has requested a private funeral. Arrangements are under the care and direction of Shaffer-Nichols Funeral Home of Crane.

Jerry was born on October 27, 1948, in Iraan, Texas. He was a decorated Vietnam Veteran, having served the Army. He received a Bronze Star, and a Purple Heart.

He was a longtime resident of Crane, living here since 1971.
Jerry married Linda Brazeal on November 12, 1971, in Crane. He had worked 24 years for Clayton Williams Energy and was currently a Production Foreman. Jerry loved to hunt, and was a golfer.
He was preceded in death by his parents, Donald and Dorothy Bailey; three brothers, Don, Jackie, and Jim; and a sister Katherine.

Jerry is survived by his wife, Linda Bailey of Crane; his son, Brett Bailey of Lubbock; two sisters, Pat Schneider of Iraan and Barbara Orozco of Houston; two brothers, Bill Bailey of Fort Stockton, and Johnny Bailey of San Antonio; and numerous nieces and nephews.
To order memorial trees or send flowers to the family in memory of Jerry Bailey, please visit our flower store.