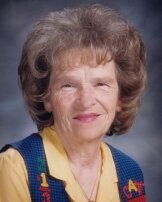 Viva Jeane Gaines Whitaker, 81, of Crane entered eternal life on January 28, 2017 at the Crane Nursing and Rehabilitation Center. Jeane was born on February 15, 1935 in Sasakwa, Oklahoma to C. D. and Lena Mae Gaines.

Visitation with the family will be held on Tuesday, January 31, 2017 from 6:00 p.m. to 8:00 p.m. at the Shaffer-Nichols Funeral Home in Crane located at 1503 South Gaston. Funeral services will be held on Wednesday, February 1, 2017 at Craneâ€™s First United Methodist Church at 3:00 p.m. with Pastor Jared Secret officiating. Burial to follow at the Crane County Memorial Cemetery where Mrs. Whitaker will be laid to rest next to her husband, Leo.

Jeane graduated from Wewoka High School in Wewoka, Oklahoma and then attended the University of Oklahoma for two years. On August 10, 1954, she married Leo Whitaker in Tecumseh, Oklahoma. In 1957, the couple followed the oilfield to West Texas where they made a home in Crane.

Jeane began her teaching career at Buena Vista Independent School District in Imperial, Texas, where she taught for 14 years, and then she moved to the Crane Independent School District where she taught for 22 years before retiring in 2011. While teaching in Crane, she obtained certification as a Certified Language Therapist and as a Dyslexia Specialist. She touched the lives of thousands of students during her teaching career.

In lieu of flowers, memorials may be made to the First United Methodist Church of Crane or Home Hospice of Odessa.

Services are entrusted to Shaffer-Nichols Funeral Home of Crane.
To order memorial trees or send flowers to the family in memory of Jeane Whitaker, please visit our flower store.