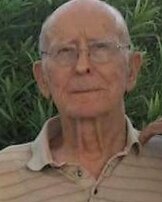 James Everett Gunnells, 91, went to be with the Lord on December 10, 2016. James was truly a good man who lived a good life.

Member of "The Greatest Generation,â€ he was born June 5, 1925 in Robert Lee, Texas to James Evans Gunnells and Angie Gunnells. James met Nadine Jackson after returning from WWII. They married on September 26, 1947 and moved to McCamey, Texas. James proudly proclaimed that he had married "the love of his life," and their relationship was a true inspiration to others. They spent many happy hours together playing with their grandchildren and great grandchildren, sitting in their back yard swing watching the humming birds, and reminiscing of their many years together. Jamesâ€™s last words were said in love to Nadine. After she whispered in his ear, "I love you," James looked at her and called her his "Sweet Girl."

James and Nadine had three children: James Edward, Morris Dean, and Twyla Jean. Before his retirement in 1995, James worked for Gandy's Creamery, the Texas Highway Department, Trico, and Grady's Oilfield Supply. James was known for his great faith in God. He was a member of the Church of Christ and loved reading the Word and singing hymns. He was also a respected member of the McCamey community. Those who knew and worked with him have said, "There was no finer man than James Gunnells." The community awarded him and Nadine the Pioneers of the Year Award in 2015.

James will also be remembered for his sense of humor, his storytelling, and his various hobbies. His family will miss James regaling them with his captivating stories about growing up on a farm, driving an ambulance for the European theater of WWII, and witnessing the liberation of the Dechau Concentration Camp. James was also known for his abilities on the tennis court and the bowling lanes. He first learned to play tennis around the age of 40 and eventually become so skilled that he could outplay the local high school tennis coach and players. He also maintained a 200 average on "the lanes" throughout his sixties and seventies. Furthermore, James deeply enjoyed spending hours in his workshop crafting items like birdhouses and furniture out of wood.

The viewing will be on December 12 from 6PM-7:30PM at Shaffer-Nichols Funeral Home in McCamey, Texas. The funeral services will also take place at Shaffer-Nichols Funeral Home in McCamey on December 13 at 2PM.
To order memorial trees or send flowers to the family in memory of James Everett Gunnells, please visit our flower store.