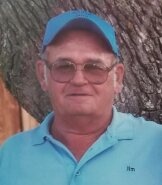 Graveside services will be held at 11:00 am on Friday, September 14, 2018, at the Resthaven Cemetery in McCamey with Reverend Ted Creech officiating. Arrangements are under the care and direction of Shaffer-Nichols Funeral Home.

Jim was born on June 13, 1942, in Bunny, Arkansas. He graduated from Wink High School. He served in the United States Navy. Jim married Mary Miletich Foust on January 13, 1968, in Pekin, IL. He had been a resident of McCamey since 1982 and was a mechanic.

Jim was preceded in death by his wife Mary, a sister, and a brother.
He is survived by his son, Dwight Foust of Odessa; his daughter, Janelle Zimmerman of McCamey; four brother; three sisters; three grandkids; three great grandkids; and numerous nieces and nephews.
To order memorial trees or send flowers to the family in memory of James Foust, please visit our flower store.