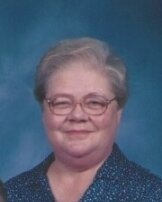 Jacqueline Sue (Skinner) Longwell went to be with her Lord and Savior on December 24, 2015.

She was born on February 24, 1946, in New Iberia, Louisiana, to Harres "Hob" and Mary Blanche Skinner. She was the oldest of 5 children. She married her husband Melvin Longwell in Gallup, New Mexico on July 18 1970.
Sue was an active member of the First Baptist Church in Rankin. She was involved in the Women on Missions, the prayer chain, and had taught Sunday School.
She had kept children for several years before she retired, and she was an avid reader. Sue loved her family and especially her children and grandchildren.

A viewing will be held at the First Baptist Church in Rankin on Wednesday, December 30, 2015, from 10am until 12pm.
Funeral Services will be held on Wednesday, December 30, 2015, at First Baptist Church in Rankin, Texas, at 2pm. Burial will follow at Rankin Cemetery. Arrangements are under the care and direction of Shaffer-Nichols Funeral Home.
To order memorial trees or send flowers to the family in memory of Jacqueline Longwell, please visit our flower store.