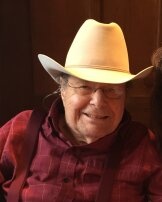 Jackson Bryan Atkinson, Jr., 91, beloved husband, father, grandfather, great grandfather, uncle, teacher and friend, left this life peacefully in his sleep in the early morning hours of Thursday, November 9, 2017 to begin his eternal life with His Lord and Savior Jesus Christ. He served his Lord, lived a full life and was loved and respected by those who knew him.
Jack was born in Dallas, Texas on December 12, 1925 to Jackson Bryan Atkinson, Sr. and Ruth Flummer Atkinson. He graduated from Paschal High School in Fort Worth in 1943 and, at age 17, pursued his dream of becoming a cowboy. Alongside his best friend, George Harley, he rode on horseback from Fort Worth to Midland to become ranch hands on the Scharbauer Ranch. They eventually saved enough to buy a pickup and horse trailer and journeyed to another ranch in Wyoming for a while. On December 11, 1943, one day before his 18th birthday, he enlisted in the U.S. Navy. He traveled to San Diego, California for basic training, then transferred to the North Texas Agricultural College in Arlington where he received an Associate in Science Diploma in 1945. He then continued his education at the University of Texas for Reserve Officers Training Corps. After the war ended he was honorably discharged in 1946 and continued his studies under the GI Bill at what is now Sul Ross State University in Alpine, Texas. He and George roomed on the second floor of a home owned by a family who had a daughter named June Joyce. They didnâ€™t like each other at first, but after a while, Jack and June fell in love. They married in 1951 after he earned his degree in Animal Husbandry from Sul Ross State University. They then moved to Hereford, Texas to manage a ranch. In 1952, they welcomed Tim Atkinson into their family. Life on the ranch was cold and difficult. Through family members, they heard of job opportunities for teachers in Crane, Texas. In 1953, they moved to Crane, where Jack began teaching math, science and chemistry. In 1955, they added Jonna Atkinson to the family. Jack also earned a Master of Education Degree in School Administration from Texas Tech University. Jack continued teaching until his retirement in 1979 and worked as a substitute teacher after he retired.
From the age of 17, he was rarely without at least one horse and a few cattle. He owned the Crane Feed and Supply for several years and was very active in the community, serving as City Councilman, Volunteer Fireman, Deacon and Sunday School teacher at First Baptist Church. He was a member of the Lions Club, was a Boy Scout and worked with the local chapter, and was active with the local teachers organization. From 1983 to 1987, he was Mayor of Crane. He and June made many lifelong friends in Crane and built a life filled with love, laughter, happiness and service to others.
He is preceded in death by his parents and his wife, June Atkinson. He will be greatly missed by his children Tim Atkinson and Jonna Atkinson Craft and her husband Steve Craft; four granddaughters, Brandy Atkinson Taylor and her husband Randy Taylor, Carrie Craft, Katy Craft Roach and her husband Collin Roach, and Rachel Craft; one great grandson and namesake Benjamin Jack Taylor and numerous nephews and nieces.
Friends are cordially invited to greet the family at Shaffer-Nichols Funeral Home in Crane from 6:00 p.m. â€“ 8:00 p.m. on Friday November 17, 2017.
A celebration of his life will take place at 11:00 a.m. Saturday November 18, 2017, at First Baptist Church in Crane with a graveside service following immediately at Crane Cemetery.
Memorials can be made to the First Baptist Church in Crane or the West Texas Boys Ranch.
To order memorial trees or send flowers to the family in memory of Jackson Atkinson, please visit our flower store.