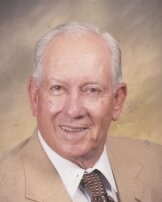 Jack M. Garner, age 88, passed away peacefully on Sunday, September 17, 2017, in McCamey. He was born on November 14, 1928 in Rankin, Texas to J.W. and Mamie Garner. Jack was the youngest of eight children.
Jack grew up on his fatherâ€™s ranches. He started working on the ranch at the age of three. He was a devoted Rankin Red Devil. Jack was a great athlete who excelled in football and basketball. Jack met the love of his life, Peggy Sue Dossey, when he was still in high school. They were married on February 17, 1947.

Jack worked for Gulf Oil/Chevron Oil from the time he was 18 years old until he retired. He was a rancher, a racehorse owner, and an avid supporter and adult leader for 4-H. He served on the McCamey ISD School Board and was a member of the United Methodist Church.

The family will be receiving friends on Wednesday, September 20, 2017, from 6:00 PM until 8:00 PM at the Shaffer-Nichols Funeral Home in McCamey.
The funeral is scheduled for 1:00 PM on Thursday, September 21, 2017 at the First United Methodist Church in McCamey.
Arrangements are under the care and direction of Shaffer-Nichols Funeral Home.
To order memorial trees or send flowers to the family in memory of Jack Garner, please visit our flower store.