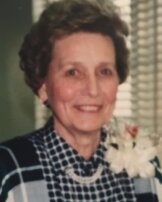 In the latter part of her life, Iva Joyce Wood Tate (Jo) liked to start her day with a cup of coffee and a check of the Obituaries in the morning paper to â€œsee if she was in there.â€ Sadly for the family, that day has arrived. And in accordance with her obituary musings/wishes, this photo is the mature Iva Joyce, not the young Jo.
Born May 4, 1922 to Ed & Iva Wood, Jo grew up on a farm in Potosi, TX, the oldest of three children. She graduated from Wylie High School in 1940 and married Troy Tate 1942. While the marriage eventually ended in divorce, it happily produced two great children: Jerry and Becky.
Aside from Potosi, Jo made homes in Abilene, Midland, Odessa, Albuquerque, NM, El Paso, and Lubbock. She loved to read, sew clothes, and embroider. In her younger days there were fishing trips to Colorado with extended family and hot games of 42. As time moved on, these were replaced with trips to her beloved Ruidoso, NM with Becky, monthly lunches with the girls, keeping up with her extended family, her beloved grandchildren and great grandchildren, and the occasional evening glass of wine. But always at the end of a good day sheâ€™d give you a radiant smile, look you straight in the eye telling you â€œIt just doesnâ€™t get any better than this!â€
Iva Joyce was miles ahead of her time in her belief that a woman should not be dependent on a man for her own money. For 37 years Jo had a career as a telephone operator, beginning in 1941 with Southwestern Bell in Abilene and ending with retirement from AT&T Lubbock in 1990. There were several starts and stops during those years depending on family obligations and what town life led her to, but it was a job she enjoyed.
In 1980 she moved to Lubbock to help her sister Deana care for their mother. In 1995, the sisters purchased a beautiful home together and for the next 20 years it was a place both their families loved visiting.
In her final years, Jo moved to Odessa to live with Becky, and it was in Beckyâ€™s home that Jo left us November 1, 2016 at the age of 94. Loved by us all, her grace mixed with an infectious laugh will be greatly missed.
Preceded in death by her parents and brother Ed Jr., Iva Joyce is survived by her sister Deana Wood Miller of Lubbock, son Jerry Tate (Judy) of Clyde, daughter Rebecca Haynie of Odessa, granddaughter Paula Mikkelsen (Steve) of Mill Creek, WA, grandson Craig Tate (Mary) of Plano, grandson Dustin Haynie (Gina) of Farmington, NM, grandson Wes Haynie of Austin and 4 great grandchildren: August Mikkelsen, Jarod Tate, Loren Tate and Ella Haynie.
A celebration of her life will be held on November 23rd at the Potosi United Methodist Church. A noon lunch will be followed by a service at 1:00 PM. In lieu of flowers, the family asks that donations be made to either the Potosi Cemetery Association (PO Box 6323, Abilene, TX 79608) or the Potosi United Methodist Church for their Re-Building Fund (2832 Potosi Rd., Potosi, TX 79602)
To order memorial trees or send flowers to the family in memory of Iva Tate, please visit our flower store.