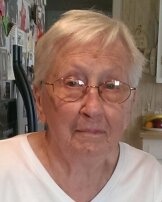 Graveside services were held at 2 pm on Wednesday, January 6, 2016 at the Crane Cemetery officiated by Tommy Parker under the direction of Shaffer-Nichols Funeral Home.

Iva Lee Sanders was born January 15, 1917, in Iredell, Texas to George Homer Sanders and Molly Retta Hudson Sanders. She married Marshall John â€œMuttâ€ Plummer on August 2, 1941 in Bossier City, La. She and Mutt raised two children, Marsha Kay and Danny Lee, in Crane. She lived in Crane 68 years, was a member of the First Baptist Church during that time and was an Eastern Star and worked with the Rainbow Girls. Iva Lee and constant companion dog, Stoni, moved to Granbury, Texas, in 2014 to live with her daughter and son-in-law. Every day she wished to be back in Crane and now she is coming back.