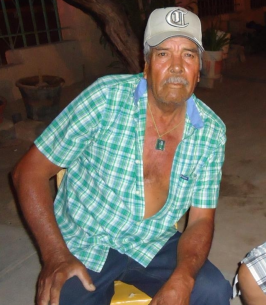 Irineo came to McCamey in 1980 at the age 37 where he met his wife Catalina Trevino Flores and married on January 10, 1981. He worked many years in in the oilfield as a derrickman. He was always a hard worker and enjoyed what he did up until he retired at the age of 62.

Irineo enjoy his family time and gatherings with his friends, he also loved working in the yard doing his gardening on his free time. He also loved his roosters and his birds even though everyone always saw him as a tough hard-working man he really enjoyed spending time with his family especially Christmas time hanging lights around the house was one of his favorite things to do.

Irineo was never known to turn anyone away he would give anyone his shirt off his back if he could he put up a tough exterior, but he had a very kind heart.

Rosary Service will be held Tuesday, July 13th, 2021, at 7 pm at Shaffer-Nichols Funeral Home Chapel. Funeral services will be held at 11 am on Wednesday, July 14th, 2021, at the Shaffer-Nichols Funeral Home Chapel with Deacon Felix Segura officiating. Burial will follow in the Resthaven Cemetery.
To order memorial trees or send flowers to the family in memory of Irineo Martinez Monrreal, please visit our flower store.