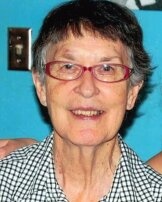 Ila V. Rhodes Hooper, Nita, was born in Oklahoma City, Oklahoma to parents Iler and Samuel Edward Rhodes on October 28, 1930. The family moved to Penwell, TX around 1935. Nita graduated from Odessa High School in 1949. She married Gordon Hooper on March 17, 1950. Nita and Gordon lived in Amarillo while Gordon served in the Air Force. At the end of his service in 1955, they moved to Crane County, then moved into town in 1960.

She was a member of the Mary Street Church of Christ in Crane. The past 3 years Nita and Gordon lived in Midland.

Nita was preceded in death by her daughter, Judy (Crane); her brothers, Jack Rhodes (Odessa) and Coy Rhodes (Snyder); and her parents (Penwell).

She is survived by her husband of almost 68 years, Gordon (Midland); three sons-Danny Hooper and wife Rhonda (Midland), Steve Hooper (Gardendale) and Paul Hooper and wife Julie (Midland). Nene had 7 grandchildren: Blaine, Sheila, Brooke, Chase, Tanner, Savannah, and Destiny; and 7 great grandchildren. She is also survived by one brother, Lowell Rhodes (Penwell); a sister-in-law, Kay Rhodes; and nieces and nephews.

The guestbook will be available to sign at the Shaffer-Nichols Funeral Home on Friday, March 2, 2018 from 9:00 AM until 8:00 PM. The family will be receiving friends at the funeral home on Friday from 6:00 to 7:30 PM.
Graveside services will be held at 11:00 AM on Saturday, March 3, 2018 at the Crane County Cemetery with Jeff Oâ€™Rear and Ed Jenkins officiating.

Arrangements are under the care and direction of Shaffer-Nichols Funeral Home of Crane.
To order memorial trees or send flowers to the family in memory of Ila Hooper, please visit our flower store.