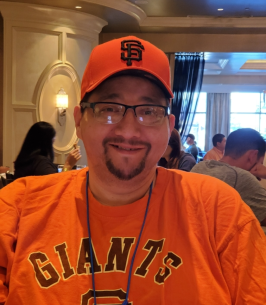 Horacio Montemayor, a devoted husband, son, brother, cousin, and friend, passed away at the age of 45 on Saturday, August 3, 2019 in Odessa, Texas.

He was born on April 29, 1974 in Dinuba, California to Elsa and Horacio Montemayor.

Horacio loved his wife, family, friends and his fur babies Nila, Sophie and DoDo. His favorite teams were the San Francisco Giants and the Dallas Cowboys. You could see him barbecuing and sporting his team jersey on game days.

He enjoyed life and giving everyone he knew and loved a hard time. If he made you mad, he was happy. He loved the "F" word and used it a lot. LOL And even though he didn't dance, he loved his music; The Hometown Boys always blasting.

Horacio worked at Stone's Home Center in Crane and always greeted the customers with a smile and was helpful to his coworkers.

Horacio is survived by the love of his life Neomi Montemayor; father Horacio Montemayor; sister Claudia, and brothers Rene and Alejandro Montemayor all from Dinuba, California; numerous nieces, nephews, cousins and host of friends.

He was preceded in death by his mother Elsa Montemayor, maternal grandmother Carmen Cerda, and paternal grandparents Hermelinda and Refugio Montemayor.