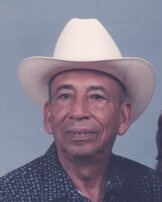 Nato Garcia was born on October 22, 1926, in Sanderson, Texas, to Simon and Francisca Garcia. Nato married Juanita Gutierrez on April 11, 1948. Nato and Juanita had just celebrated 69 years of blissful marriage. Nato had a strong work ethic and took great pride in all of his work.

Nato was Catholic and faithfully attended St. James Catholic Church in Sanderson and subsequently Sacred Heart Catholic Church in McCamey.
His deep belief in God sustained him throughout his life. Nato loved spending time with his wife and with his family. He was most happy when all of his family members gathered together to celebrate special occasions.
Nato was an avid Texas Rangers fan. Nato also loved to follow the Dallas Cowboys, and he would endearingly refer to them as â€œmis vaqueros.â€ The Cowboys have lost one of their greatest fans.

â€œBrothers and sisters, we do not want you to be uninformed about those who sleep in death, so that you do not grieve like the rest of mankind, who have no hope.â€ 1 Thessalonians 4:1
To order memorial trees or send flowers to the family in memory of Honorato Fabian "Nato" Garcia, please visit our flower store.