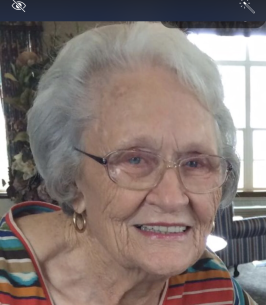 Born on January 21, 1924, north of Gould, Oklahoma, to Charlie Samuel and Eula Miller Meason. Goldya was a servant to the Lord and loved her church family. She was a very independent and determined woman. She never shied away from hard work and lived to serve and do for others. Of course, she did not want anyone doing for her- because she could do it herself. Goldya worked at Gibson’s for Bootsie and Doyle Conley for many years. She formed many close relationships with the other employees. After the store burned, she worked for J.M. Rabon’s hardware store until the store closed. She then worked at the school as a cafeteria cashier until she retired at the age of 80. She was a member of the Ft. Stockton Garden Club, where she excelled at designing flower arrangements. When Goldya was not busy working or taking care of others, she stayed occupied working in her garden- her absolute passion. Goldya loved her family and extended family and never missed an opportunity to spend time and celebrate with them.

The viewing will be from 10:00-12:00 at the Ft. Stockton Church of Christ on December 19th. There will be a celebration of Goldya's life on Saturday, December 19th at 1:00pm at the Ft. Stockton Church of Christ. Burial will follow at the East Hill Cemetery in Ft. Stockton. Arrangements are under the care of Shaffer-Nichols Funeral Home of Crane.
To order memorial trees or send flowers to the family in memory of Goldya Hendricks, please visit our flower store.