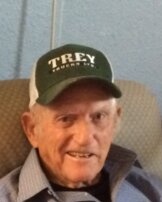 Glenn Jackson, 90, a longtime resident of Lynn County, and eleven-year resident of Rankin, passed away on Tuesday, December 27, 2016, at the Reagan County Care Center in Big Lake.

Graveside Services will be at 1:00 PM on Saturday, December 31, 2016, at the Rankin Cemetery with Jacob Reed officiating. Arrangements are under the care and direction of Shaffer-Nichols Funeral Home.

Glenn was born on January 5, 1926, in Draw, Texas. He married Jean Wells on April 14, 1951, in Lovington, NM. Glenn was a longtime member of the Methodist Church. He loved trucks, and had been an independent truck driver from the time he was 16 until he was 75. Glenn enjoyed taking walks and would walk up to two miles a day until last year. He was also known to be a walking encyclopedia. But most of all, Glenn loved his family, and cherished the time spent with them.