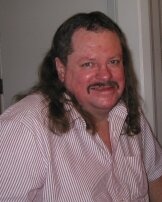 Gerry Ainsworth was born on May 5, 1957, in Taylorsville, MS. He was the fifth of seven children born to Bill B. Ainsworth and Catherine Earl Allen. He died on Monday,
October 2, 2017 in Odessa, Texas, surrounded by his loving family.

Gerry attended school in Ft. Stockton. He lived in Midland for a number of years but returned home when he retired. It would be hard to say what Gerry loved most, cooking or fishing. His talents in the kitchen ranged from BBQ to cheesecake to salsa and jerky. In addition to his love of fishing and cooking, Gerry recently became active in Rock Solid Boxing and looked forward to his weekly sessions. He was really proud of the work he had been putting in there.

Gerry was preceded in death by his parents and by his brother, Paul Ainsworth.
He is survived by a brother, Allen (Marilyn) Ainsworth of Willis, TX, four sisters, Kathy Porter of Alvarado, TX, Joan (Randy) Reeves of Ft. Stockton, TX, Billie Southon of Springfield, LA. and Michelle (Mick) Buchanan of Dallas, TX. He is also survived by numerous nieces and nephews, each one being special and each one being his favorite.

Graveside services will be held at 11:00 AM on Thursday, October 5, 2017, at Easthill Cemetery in Ft. Stockton with Rev. Gary Dunn officiating.
To order memorial trees or send flowers to the family in memory of Gerry Ainsworth, please visit our flower store.