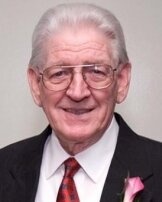 On May 5, 1951, George married Margaret Kathryn (Katy) Ritchey in Hamlin, TX. They were married 59 years until her death in 2010. Hoping initially to have at least one son, George and Katy were blessed with three beautiful daughters, of which George, comically, commented, â€œThree queens beats two queens and a jack any day.â€

George worked for Atlantic Richfield, Co., in Lovington, NM, and moved to Crane in 1967, where he worked for ARCO, at Block 31, for 30-plus years.

George was a wonderful â€œPapaâ€ to eight, and â€œPapa Georgeâ€ to fifteen great-grand children and one great-great granddaughter.

George was a loving man who always put others before himself. He touched many lives, including those outside of the immediate family. He will be missed by many.

Memorial services will be held on Memorial Day, Monday, May 28, 2018, at First Baptist Church of Crane, TX, at 1:30 P.M.
To order memorial trees or send flowers to the family in memory of George Darden, please visit our flower store.