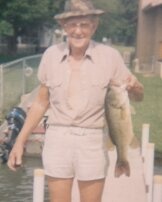 Fred Bond, 89, of Crane, passed away on Wednesday, January 4, 2017, at the Crane Skilled Nursing Center.

Graveside services will be held at 3:00 PM on Sunday, January 8, 2017, at the Crane County Cemetery with Tommy Parker officiating. Arrangements are under the care and direction of Shaffer-Nichols Funeral Home.

Fred was longtime resident of Crane. He worked many years for Southwestern Bell before his retirement. He was a member of the Crane Lions Club, he enjoyed hunting and fishing, and he was a Christian. Fred also loved to motorcycle riding, and his two Pomeranians, Tony and Lucky.

Fred was preceded in death by his son, Gary Bond; a sister, and a brother.

Fred is survived by his loving wife, Doris Bond of Crane; two grandchildren, Kayla Bond of Odessa, and Kyle Bond of Ogden, Utah; his adopted kids, Randy and Tina Lewis of Odessa; and dear friends, Tom and Audra Parrish.
To order memorial trees or send flowers to the family in memory of Fred Bond, please visit our flower store.