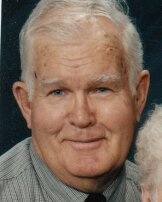 Funeral Services will be held at 11am on Monday, November 14, 2016, at the Eastside Baptist Church with Reverend William Hutto officiating. Burial will follow in the Resthaven Cemetery with arrangements under the care and direction of Shaffer-Nichols Funeral Home.

Frank was born on June 19, 1930, in Welington, Texas. Frank was an Army Veteran, serving in Germany during the Korean Conflict.
He married Ida Carlene Wills in Iraan on May 22, 1953. He had lived in McCamey for 62 years. Frank retired from Pip Petroleum in 1992 as a lease operator. He had served as a Deacon at Calvary Baptist Church. Frank loved farming with his John Deere tractor on his land. He drove a bus for McCamey ISD for a couple of years. Frank loved woodworking, and was one to tinker with things around the house.

He was preceded in death by his wife, Ida Carlene Crossland on June 20, 2012; five brothers; and three sisters.

Frank is survived by two daughters, Mary Glenn and Barbara Dale both of McCamey; two sons, Richard Crossland and his wife Debra of McCamey, and Ronnie Crossland and his wife Norma of Midland; one sister, Iola Mills of Columbus, OH; 7 grandchildren; 14 great grandchildren; and one great-great grandson.
To order memorial trees or send flowers to the family in memory of Frank Crossland (Crossland), please visit our flower store.