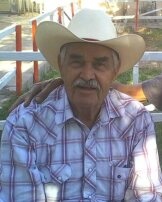 Francisco Paredes, 80, of Crane, passed away on Sunday, December 13, 2015, in the Midland Memorial Hospital.

Francisco was born on June 15, 1935, in Mexico. He had lived in Crane for 25 years. He had retired from construction as an installer. Francisco was a Mormon Priest, and was a member of the Church of Jesus Christ of Latter Day Saints in Odessa.
He was preceded in death by his wife, Estella Paredes in 2003; and a son, Alberto Paredes in 2011.