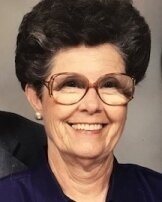 Mrs. Frances Louise Gray, 93, of Rankin, Texas died on Thursday, September 21, 2017, in the Crockett County Care Center where she had been a resident for the last five years.

Graveside services have been set for 2:00 PM on Monday, September 25, 2017, at the Rankin Cemetery with Reverend Troy Strickland of the First Baptist Church of Rankin officiating. Arrangements are under the care and direction of Shaffer-Nichols Funeral Home of Crane.

Mrs. Gray was born on July 8, 1924, in Mexia, Texas and was married to Billy E. Gray on February 6, 1943, in Odessa, Texas. She was a housewife, and a secretary for the Western Company until her retirement. She moved to Rankin, Texas in 1951 from Odessa. She was a Christian and a member of the First Baptist Church.

She is survived by two sons, Terry L. Gray of Midland and Tommy C. Gray of Ozona; five grandchildren; and fifteen great grandchildren.
To order memorial trees or send flowers to the family in memory of Frances Gray, please visit our flower store.