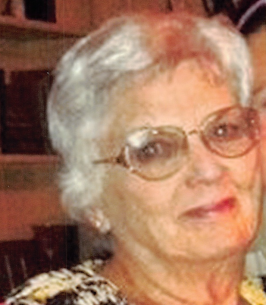 She was the youngest of daughters with two brothers, Glenda Bell, Rose Ann LeRoy and Carl Madison Jr.

She met Herschel Bruce Igo the summer before her Senior year of High School (she was 17),they dated until she was 18 and graduated High School. The couple married July 6, 1947. They lived in Cordell Oklahoma until they decided to move to Texas, April 1, 1949 they moved to McCamey Texas, momma said it was the worst sand storm she had ever seen and the friend that helped them move kept asking her if she was sure she wanted them to unload her things. She assured them she did, so she and Bruce made their lives in McCamey Bruce worked in the oil fields and Flora worked different jobs, and the summer of 1961 their only child, Navada Lynn was born, she arrived July 19.

August of 1969 Flora went to work at the McCamey school cafeteria, 4 years later she became the cafeteria manager. She loved this position, she always liked taking care of someone and now she had an entire school of kids to look after. There was never a child turned away. Between her assistant manager, and best friend, Elsie Strigler they pulled money out their pockets to feed a child. Now, if you acted up while you were in the cafeteria eating, Flo would be right there telling you to either straighten up or leave!!! She had this apron that she wore everyday, it was very special to her, she had painted the everlasting and never forgotten Badger head on it, she was a true fan!! GO BADGERS!!!

Flora retired in 1991. Bruce had passed in February of 1987, and Navada was living in Ballinger. The nephew she and Bruce raised, Sid Lundy had graduated, so she decided to move to Ballinger. She had become a "Nana" that year and wanted to be close to that grand daughter.

In 1996, she moved back to McCamey. She and her sister Rose Ann traveled and did many things together, Skipbo was always a great pastime and was regularly played on a daily basis.

Flora had reacquainted with a long time friend, Robert Sosebee and they married in 1999, Rose passed in 2002, so the couple traveled and that they did. They saw all four corners of the nation and several states in between. They retired from traveling and decided to settle in Roscoe, Tx. Navada and her husband Steve Moseley and daughters, Lynzi Sioux, Madison Paige, and Reagan Navada were living there. Flora followed her grand daughters sports activities until Roberts death in 2017. Navada and family were living in Lovington, NM and it was decided that Flo was to far away and needed to be closer, so she joined them in New Mexico in 2018. Flora was a member of the Heritage Program and spent time quilting and sewing, and coloring, she also enjoyed watching Reagan in her sports programs.

She was the only living member of the Carl Madison and Hettie Bell Pearson family. She saw many years, and many many things happen in her lifetime, and prayed every day the things would be a better, and a different way. She was a devoted Christian woman, believed in the Father, the Son and the Holy Ghost and wasn't afraid to share scriptures with you. Every morning while getting dressed she would quote, Colossians 3:14, " And regardless of what else you put on wear, Love". And her other favorite scripture was Psalms 46:10 "Be still and know the I am God". If mother thought you needed a scripture or two she wasn't afraid to set you down and share a couple with you.

I wonder who she is taking care of now, cooking for, loving, maybe sewing for, or even playing cards with. One thing I do know she is singing praises and shouting Hallelujahs!
Amen.
To order memorial trees or send flowers to the family in memory of Flora N. Igo, please visit our flower store.