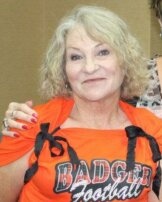 She spent many years in the Oilfield Supply Industry. Later in life she decided to pursue a career in Real Estate. When retiring to Crane she operated â€œNanaâ€™sâ€ CafÃ©. She was a Nana in every sense of the word.

Throughout her life she has touched many lives. She has always gone out of her way to help everyone she could. Her brother considered her a second mother. One of her grandchildrenâ€™sâ€™ fondest memories of her is spending nights camping out in the living room and watching classic black and white movies with her.

She was preceded in death by her mother, father, and brother Michael Kennedy.

Family will be receiving friends at Shaffer-Nichols Funeral Home on Friday, December 29th from 6:00pm â€“ 8:00pm. Funeral services will be held at Shaffer-Nichols Funeral Home Chapel in Crane on Saturday, December 30, 2017 at 2:00pm. Burial will follow in the Crane County Cemetery.
Pallbearers will be Tyler Woodfin, Marcos Rodriguez, Jacob Woodfin, Caleb Woodfin, Mitchell Swiney, and Kyle Swiney.
To order memorial trees or send flowers to the family in memory of Esther Wilson, please visit our flower store.