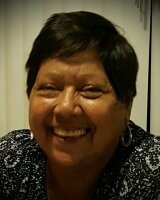 Esperansa was born on July 7, 1954, in Sheffield where she lived most all of her life. She married Pedro Flores on February 7, 1972, in Sheffield. She was a homemaker, and a member of the Good Shepherd Catholic Church. Hopie loved her family, especially her grandchildren. She was an excellent cook, and was known for her tortillas. She loved to sew, and to quilt. Hopie quilted blankets for every one of her siblings first grandchild. She was an avid Iraan Braves fan and supporter. Hopie never met a stranger and everyone was always welcome in her home.

Arrangements are under the care and direction of Shaffer-Nichols Funeral Home.
To order memorial trees or send flowers to the family in memory of Esperansa "Hopie" Flores, please visit our flower store.