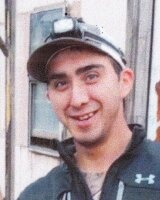 It is true when they say that the good ones go first, because Milo was definitely one of them. Milo loved everyone and without hesitation he was there to lend a hand. Milo worked at T&T Pipe and Supply where he did it all, he fixed pumps, made deliveries, stocked shelves, and anything else that needed to be done.

He has spent all of his life in Crane and was known by many. He helped brothers, sisters, nieces, nephews, cousins, friends, and with all of his heart as it brought him joy. One of his greatest characteristics was his joy in just playing with kids just like he was a kid himself, it didnâ€™t matter what it wasâ€¦.wrestling, jumping on the trampoline, playing with toys on the floor, or just playing in the yard. His smile was contagious, his hugs were filled with love and he lived his life enjoying the little things. He just wanted to make people feel good, it was not uncommon for him to just show up at your house with a bag full of fajitas, pork chops, spices, and all the fixingsâ€¦all because he just felt like cooking for those around. There were many happy and joyful moments with Milo that will be in our memories forever. His love for others can never be doubted and will never be forgotten.

Rosary was said at 7:00 PM Sunday, March 26, 2017, at the Shaffer-Nichols Funeral Home Chapel. Funeral Mass was held at 3:00 PM on Monday, March 27, 2017, at the Good Shepherd Catholic Church in Crane. Burial was in the Crane County Cemetery. Arrangements are with Shaffer-Nichols Funeral Home.
To order memorial trees or send flowers to the family in memory of Emilio Jesus "Milo" Fuentes, please visit our flower store.