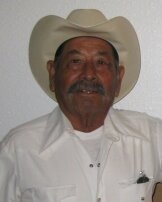 Eliserio Medina, 87, of Sheffield, passed away on Monday January 2, 2017 at Odessa Regional Medical Center. He was born to Isaac and Eulalia Medina on September 20, 1929 in Mexico. He moved to Texas at the age of 19. On January 14, 1957 he married Lionor Castaneda in Fort Stockton TX. He was employed with the Noelke Ranch for 48 years until he was retired to his home in Sheffield. Together they had 11 kids.

A great memory the boys have of their father: He taught us to work and We will forever be grateful for that. He brought all us (boys) up driving a John Deere while he and the others loaded and stacked hay, to plowing the land, sowing the seed, irrigating the fields to cutting and bailing hay. Showed us to work cattle, sheep, hair goats, and meat goats. All while keeping up with his and mothers real-estate property.


Public viewing will be held at the Good Shepherd Catholic Church in Sheffield, T.X. on Wednesday, January 4th @ 6:00 p.m.

Funeral services will be held at Good Shepard Catholic Church in Sheffield TX on Friday, January 6th @ 3:00p.m. Following burial at Sheffield Cemetery.
To order memorial trees or send flowers to the family in memory of Eliserio Medina, please visit our flower store.