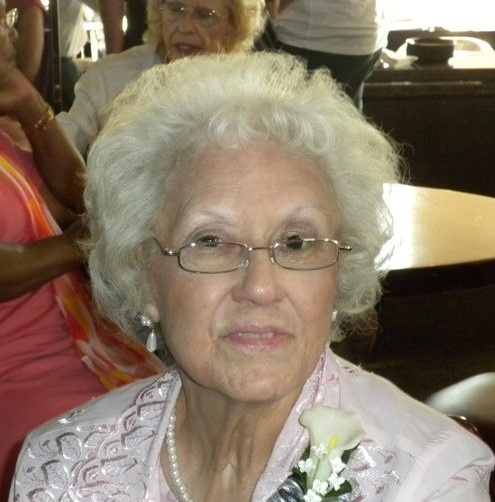 Edemencia Sanchez Rubio was born on December 19, 1936, in Ft. Stockton, Texas. Most everyone called her Nancy for short, and in her teen and early adult years she was affectionately known as "Mencha" by her family and friends. She grew up in McCamey, Texas, the 5th of 7 daughters to her parents, Epifanio and Julia (Cuellar) Sanchez. She attended the McCamey Public Schools, lived in McCamey in her early years and worked at Martin's Department Store. She married her husband of 49 years, Roberto Rubio, and moved away from McCamey. Her future husband was a truck driver at the time, and was passing through town when he spotted her on top of a float in a local parade. Nancy was the Lion's Club Sweetheart and the star of the parade. After seeing her, the young truck driver just had to know who the beautiful girl dressed all in pink lace was. He was very enamored with her, swept her off her feet and they married shortly after in Lovington, New Mexico, on March 25, 1959. With Roberto being a truck driver, they moved often as they started their family before finally arriving in Conroe, Texas, where they would settle down to raise the family and Roberto took up working as a house painter. Nancy was a housewife and maintained the home. She was an excellent cook who enjoying creating the meals that she prepared for her family and was well known for her cooking prowess. She was an incredible seamstress and often made many of her own clothes as well as those of her children, along with various other items that she was able to create with her sewing skills. Sewing was a passion for her and she took great joy in the many things that she was able to create. She continued to enjoy her sewing until very late in life when she could no longer perform the physical actions. She endured overwhelming physical hardship when Guillain-Barre Syndrome took away her mobility, effectively paralyzing her in October 1986. She slowly gained mobility back over months and years, but not to the extent of her pre-illness health and she required the assistance of a walker for the remainder of her life. Church was a huge part of her life, and she loved her church and her church family very much. She so looked forward to her Sundays, and for the opportunity to get dressed up to attend services. Family was very important to her and she took great joy in the time spent with her family, especially her grandchildren and great-grandchildren. She was always thinking of her family and was constantly concerned with their well-being. After the passing of her husband on May 20, 2008, she moved closer to her oldest daughter, Margie, before finally moving into her home for her last 3 years of life. Our Heavenly Father took her back into his glory on July 3, 2022. She passed from this earthly life in her home in Richmond, Texas, with her daughter Margie, and her son Rob, on either side of her.

Nancy was preceded in death by her husband Roberto Rubio, her parents, Epifanio and Julia Sanchez, and two sisters, Mary Lee Arana and Elidia Martinez.

Fourteen great-grandchildren and one great-great-grandson.

Funeral Services will be held at 11:00am on Saturday, July 9, 2022, at the Shaffer-Nichols Funeral Home Chapel in McCamey.  Burial will follow in the Resthaven Cemetery.

To order memorial trees or send flowers to the family in memory of Edemencia Sanchez Rubio, please visit our flower store.