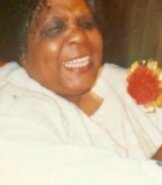 Earnestine Jeffery Vaden was born on November 27, 1940, in Gilmer, Texas to the parentage of Richard and Charlie Mae Jeffery. She was a long-time resident of Crane, Texas where she grew up and accepted Christ under the Pastorage of her uncle, Reverend T. J. Hollins at an early age.

Earnestine attended and graduated from Bethune High School. She also attended Prairie View A & M College where she aspired to be a teacher.

Earnestine traveled in many of the 50 states advocating for the betterment of the states. She loved camping, sewing, cooking, singing, evangeling, and overall her family which always came first in her life. When she baked her famous â€œsyrup cakeâ€ she loved to see the reaction of peopleâ€™s faces. Also while in living in Detroit, she was a lobbyist advocating with the Michigan Senate in promoting health care and getting HMOâ€™s and cheaper insurance rates for the state of Michigan.

Earnestine moved back to Crane to help take care of her parents, her brotherâ€™s children and her grandchildren. She had the â€œKool-aid houseâ€ in Crane as many children called it and often times called upon her â€œback scratcherâ€ as her friend.