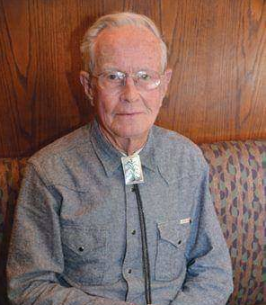 He said you only came to Iraan for two reasons: you either intended to come or you were lost. He intended to come. Over an estimated 3,000 babies, 10,000 patients and 59 years later, with always twinkling eyes, Dr. Franks said, “…nothing’s given me an ulcer, a heart attack, a nervous breakdown, or another wife. I wanted to be a family doctor, be my own boss and take care of people. I practiced medicine during the golden years. I love it.” (Texas Academy of Family Physicians interview in 2012).

Dr. Franks often said that if you take care of the people that they would take care of you. He has loved and been loved by his community, patients, friends and family. He is missing them as much as they are missing him. His energy and spirit will live on in us. We are grateful. He is survived by his wife Chris “the love of his life” and his daughter Suzanne Franks “the light of his life.”

Edd Franks was born in Roby, Texas near Abilene in 1929. When he was eleven years old, his mother suffered a tragic death which inspired him to become a doctor. After her death, he and his little brother spent their childhood with relatives in and around Brownfield.

At McMurry College, he met two women who were turning points in his life. The summer before his sophomore year, he conducted freshman biology labs as a teaching assistant for Dr. Ruth Holzapfel, professor of biology, where he met Christine Hambright who needed help dissecting her frog.

During Edd’s junior year, his mentor Dr. Holzapfel received an offer from Midwestern University in Wichita Falls to become Chairman of the Department of Life Sciences. She told Midwestern that she would accept the position if she could bring her lab TA Eddie. Edd graduated from Midwestern University with majors in biology and education and minors in chemistry and English and subsequently married Christine Hambright who was by then teaching fourth grade in Seminole.

After college during the Korean conflict, the U.S. government drafted him into the Army Medical Service Corps. at Valley Forge Army Hospital in Pennsylvania where he taught operating room and medical nurses. He and Chris were so homesick for Texas that in the evenings, they read aloud Giant by Edna Ferber, and Edd embroidered quilt squares with oil derricks, cotton bolls and cowboy hats.

After his two-year stint in the Army, he applied to medical school but was not accepted. He and Chris moved to Irving, living in a travel trailer, where he taught high school biology and worked at Hoffbrau Trailers. That year, hocking a coffee pot over and over helped them make ends meet.

The next year, the University of Texas Medical Branch at Galveston accepted him. They traded their travel trailer for a little white house surrounded by palm trees. He worked various jobs. She taught school.

In 1959 he received his medical degree and returned to Brownfield. One day, four well-dressed men came into his office. Dr. Franks wondered, “Oh my Lord, have I killed somebody? Is my drug license up?” These men from Iraan had heard from one of Dr. Franks’ medical school classmates in Uvalde that he wanted to establish his practice in a small west Texas town.

In the summer of 1960, Dr. Franks and Chris drove into Iraan. A crowd had gathered along the road that ran by the public pool. A truck had mortally hit a little boy crossing the road. Dr. Franks pronounced him dead. Later that evening, the town welcomed Dr. Franks as their doctor at a covered dish supper in the community center.

In 2009 Dr. Franks retired from practicing medicine at the age of 80 but continued to attend continuing education classes hosted by the Texas Academy of Family Physicians (TAFP). In the summer of 2018, Dr. Franks last attended one of these conferences, joined by his wife Chris and daughter Suzanne.

While practicing medicine “from the womb to the tomb”, Dr. Franks loved going to his farm to take care of his sheep, goats and cows almost every day for many years. He enjoyed hunting deer, quail and turkey there and basking in the quiet solitude. He engaged in other hobbies at various points including ceramics, weaving, embroidery / needlepoint / sewing curtains when needed, tanning rattle snake skins and fashioning them into vests / hatbands, designing and building an adobe house from his farm’s dirt and more.

– Hosted a total of 28 fourth-year medical students over many years for one to two-month preceptorships in his medical practice, usually during hunting season
– Brought medical care to villages in Mexico
– Chief of Staff of Iraan General Hospital
– One of nine founding members of the TAFP Foundation which supports medical students, residents and research
– President of TAFP, among various other leadership roles
– State Director, Texas Division of the American Cancer Society
– Member of the Iraan-Sheffield Independent School District Board of Trustees
– President of Iraan Lions Club
– President and Member of the Board of Directors of the Iraan Chamber of Commerce
– Organizer, Creative Director, Master of Ceremonies of Miss Oola Pageant during Alley Oop Days
– Member of the Board of Trustees of Iraan Methodist Church
– Subject of a filmed documentary “TRUCE”, the story of a family physician, in 1976 and broadcast nationwide over ABC in 1978

At Dr. Franks’ request, there were no services. Please consider a donation to West Texas Boys Ranch (www.wtbr.org).
To order memorial trees or send flowers to the family in memory of Dr. Edwin R. Franks, please visit our flower store.