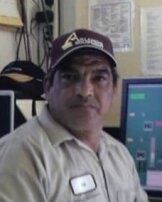 Doug McAnaugh, Jr. 58, of Rankin, passed away on Tuesday, December 13, 2016, at the University Medical Center in Lubbock.

Funeral services will be held at 10am on Saturday, December 17, 2016, at the Rankin Park Building. Burial will follow in the Rankin Cemetery. Arrangements are under the care and direction of Shaffer-Nichols Funeral Home.

Doug was born on April 28, 1958, in Big Spring, Texas. He had lived in Rankin most all of his life. Doug was known for being a man of his word.
Doug loved his community and supporting the kids, and he had coached the Cardinals for little league in the past. He enjoyed fishing, wood working, and plumbing.
Doug loved his work. He was a mechanic for Energy Transfer and worked on natural gas compression engines.
Doug loved his family, and especially his momma. He also had a special place in his heart for animals, and loved his rescue dog, Mac.

Doug was preceded in death by his father, Douglas McAnaugh Sr.; and his step father, Sparky.

Survivors include his wife, Brenda McAnaugh of Rankin; his mother, Jessie Sparks of Rankin; four sons, Doug â€œBitâ€ McAnaugh III of San Angelo, David McAnaugh and his wife Danielle, Daymond McAnaugh and his wife Jessica, all of Rankin, and Corey McAnaugh and his wife Brooklyn of Snyder; two step sons, Logan Guerrero and Brandon Guerrero, both of Llano; two step daughters, Anna Kline and her husband Brad of Horseshoe Bay, TX, and Katlyn Blair of Llano; three brothers, Paul Medina of Midland, Stewart Sparks and Charlie McAnaugh, both of Rankin; three sisters, Gila Davis and Diann Martinez both of Big Spring, and Temple Sparks Watson of Rankin; and 15 grandchildren.
To order memorial trees or send flowers to the family in memory of Doug McAnaugh Jr., please visit our flower store.