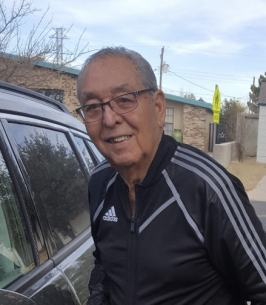 Dionicio (Danny) Montez Molina was born November 10, 1936 in Ft. Stockton, Texas, to Tomas Molina and Jesusita Molina. He had 5 sisters: Chelo Licon, Gloria Orona, Socorro Santana, Maria Valdez, Yolanda Martinez, and one brother: Dolores Molina. At the age of 18 he enlisted in the Army and served 4 years with two tours in Germany. After the Army he met the love of his life Enue Ayala. They married October 19, 1960 in McCamey, Texas, at Sacred Heart Catholic Church. Dionicio worked as an oilfield operator for over 25 years at Chevron. For 20 years he and his wife ran and owned Molina's Restaurant in Crane Texas.

Dionicio loved to hunt and fish. He created the love for outdoor adventures for his children, where they cherish memories of their frequent trips to Copeland Ranch.
Dionicio was a man with a heart of gold. He was a friend to everyone. He was always willing to lend a helping hand. He helped whole heartedly putting others first and always remained humble. His greatest joy was spending time with his children.

Dionicio is survived by his wife Enue Molina of 58 years. His two daughters: Elisa Gonzalez and her husband Fidel Gonzalez of Odessa, DeAnna Molina of Odessa, Three sons: Nicky Ray Molina and his wife Sara of McCamey, Danny T. Molina and his wife Jasmine of McCamey, and Adam Molina and is wife Tiffani of McCamey. He was blessed with 15 grandchildren as well as numerous nieces and nephews. Dionicio was preceded in death by his parents, sister Chelo, and brother Dolores.

To order memorial trees or send flowers to the family in memory of Dionicio "Danny" Molina, please visit our flower store.