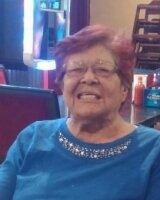 Delfina was born on December 24, 1938, in Sheffield. She had lived in Sheffield most all of her life. Delfina was a homemaker, but she also owned and operated the Conoco Service Station in Sheffield with her husband Hilberto for 10 years.

Delfina was a member of the Good Shepherd Catholic Church. She liked to needle point, gardening, and in her earlier years she enjoyed swimming. Delfina enjoyed her church activities, being with family-especially her grandchildren.

She was preceded in death by her son, Ruben Delgado; a granddaughter, Cindy Delgado; her brother, Albert Rodriguez, Jr.; and a sister, Ethel Mae Rodriguez.

Survivors include her husband, Hilberto Delgado of Sheffield; two sons, Gilbert Delgado and his wife Elma of Copeville, TX, and Mario Delgado of Sheffield; a daughter, Irma Delgado of Dallas; a step daughter, Mary Jo Cruz of Houston; two brothers, Cresencio Rodriguez of Rankin, and Raymond Rodriguez of Midland; five sisters, Carol Armendarez and Laura Salinas both of Rankin, Sally Munoz of McCamey; Ophelia Teal and Mary Ellen Rodriguez both of Midland; 10 grandchildren, and 5 great grandchildren.

Arrangements are under the care and direction of Shaffer-Nichols Funeral Home.
To order memorial trees or send flowers to the family in memory of Delfina Delgado, please visit our flower store.