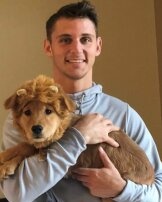 Senior Airman David Luke Pharaoh, 23, of Grand Forks, North Dakota, passed away on Monday, October 1, 2018, in Grand Forks.
Luke was born on August 23, 1995, in Riga, Latvia. He was a graduate of Atascocita High School. Luke loved all types of sports-baseball, basketball, but especially football. He was a big fan of Texas A & M and the Dallas Cowboys. Luke enjoyed games on his X-Box and playing Call of Duty, but most of all he enjoyed spending time with his family and friends.
Luke joined the Air Force and moved to Grand Forks in November 2015. He was assigned to the 319th Security Forces Squadron. Luke received an Air Force Achievement Medal for going overseas in 2017. He was selected for the security forces travel team charged with protecting military assets at Cavalier Air Station, as well as performing duties on Grand Forks AFB. Luke also served as Ceremonial Guardian on the Air Force Honor Guard.
Luke was preceded in death by his grandparents, Narl Hester, Billie Hester, Georgie Hester, and Steve Pharaoh.
Survivors include his parents David and Kathylin Pharaoh of Fredericksburg, TX; two sisters, Kristin Pike and her husband Christopher of Pearland, TX, and Stacy Mason and her husband John Allen of Greenwood, TX; three nephews, Jonathan Mason, Noah Pike and Nathaniel Pike; two nieces, Maggie Mason and Lily Pike; his grandmother, Betty Pharaoh of Crane; and numerous aunts, uncles, and cousins.
In Lieu of flowers, donations can be made to Cross & Crown Outreach, 128 Marion, Meadowlakes, TX 78654.
To order memorial trees or send flowers to the family in memory of David Pharaoh, please visit our flower store.