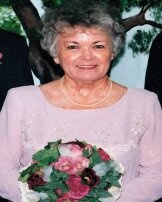 Daisy Lorraine Smith Oâ€™Haver, 86, of McCamey, passed away from her earthly home into her heavenly home on November 27, 2018, in Midland, Texas.

Daisy was born on May 3, 1932, in Nowata, OK. She was a homemaker and a longtime resident of McCamey.

She grew up in Nowata, Oklahoma then moved to Ft. Stockton with a friend of hers where she met and married C.G. â€œTubbyâ€ Smith. They moved to McCamey where they raised three children. She worked at many jobs, but her favorite was her cake decorating business. She made birthday, wedding, novelty and special occasion cakes for many years. Everyone loved Miss Daisyâ€™s cakes.

Daisy was a member of the First Assembly of God church for 50 plus years where she played the piano and guitar. She later attended Bethel Baptist Church until her passing. She loved playing piano and played often at the McCamey Senior Center and McCamey Nursing Home for years.

On March 16, 2002, she married her loving husband, David Oâ€™Haver. They were married 16 Â½ years. She loved being with David and her family especially during the holiday season.

Daisy was preceded in death by her parents Bert and Lillie Hemphill, a son, Jerry Smith, and her first husband C.G. â€œTubbyâ€ Smith, five brothers and two sisters.

Daisy is also survived by one sister, Jewell Bailey of Nowata OK., and one brother, Henry Hemphill of Pahuska, OK., a niece, Pat Johnson, two great nephews Wayne Johnson and Brett Johnson, all of Grapevine, Texas and two nieces Trecia Bickford of Claremore, OK and Joyce Meeker of Inola, OK. Numerous other nieces and nephews survive her along with many, many friends.

The family will be receiving friends at the Shaffer-Nichols Funeral Home in McCamey on Thursday, November 29th, from 6:00 p.m. until 8:00 p.m.
A celebration of life will be held Friday, November 30th, at 10:00 a.m. at First Baptist Church in McCamey with Ted Creech officiating. Burial will follow at Resthaven Cemetery.

In lieu of flowers, memorials may be made to Bethel Baptist Church, PO Box 917, McCamey, Texas 79752 or the Lewy Body Dementia Association, Inc., 912 Killian Hill Road S.W., Lilburn, GA 30047 or online at lbda.org
To order memorial trees or send flowers to the family in memory of Daisy O'Haver, please visit our flower store.