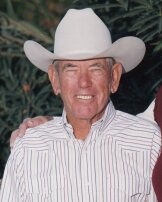 Cy was born in Del Rio, Texas and lived on the Pecos River in Terrell County as a rancher for all his life. He attended several Catholic Schools around Texas while growing up and graduated from Sanderson High School. In 1952 Cy joined the U.S. ARMY during the Korean War. He served his country honorably for 2 years in the 1st ARMY Artillery and then came back to Terrell County to ranch and raise his family.

Graveside services will be held at 11:00 am on Tuesday, November 28, 2017, at the Sheffield Cemetery with Don Jackson officiating. Pallbearers will be Ward Kerr-Active Duty Military, Banner Joe Kerr, Cole Banner, Wyatt Banner, Mont Cravens, and Clay Cravens. In lieu of flowers, memorials can be made to a favorite charity, or to Alzheimerâ€™s research.
To order memorial trees or send flowers to the family in memory of Cy Banner, please visit our flower store.