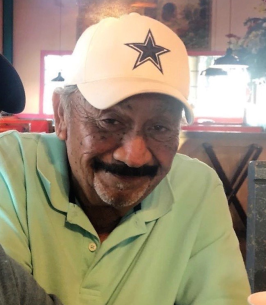 Crecencio (Chencho) Rodriguez of Rankin, TX, passed-away peacefully on October 31, 2020 at the age of 79.

Chencho was born April 19, 1941 in Sheffield, Texas. He started working as a young teenager helping his father with various types of ranch work. As he got older, he started working in the oilfield industry as a rig operator for over 25 years. He moved to Rankin in 1975.

Chencho was a devoted father. He enjoyed fishing and watching his Dallas Cowboys. He was a loving man, outgoing, and overall an amazing person. He was a devoted catholic and heavily involved with St. Thomas Catholic Church in Rankin. He will be deeply missed by his family, friends, and all who knew him.

Viewing will be held on Thursday, November 5, 2020, at the Rankin Park Building in Rankin, TX. The rosary will commence at 7pm. The funeral services will be held at 2pm at the Rankin Park Building on Friday, November 6, 2020, followed by the burial services at the Rankin Cemetery. With all due respect, we ask all who attend to please wear a face mask. Arrangements are under the care of Shafer-Nichols Funeral Home.
To order memorial trees or send flowers to the family in memory of Crecencio F. Rodriguez Sr., please visit our flower store.