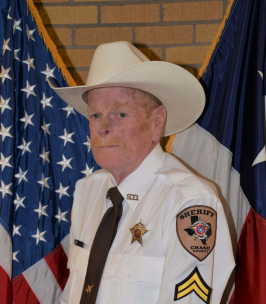 Cpl John M. Bunyan, 68, left this earth on Monday, August 16, 2021. He left this earth with a strong sense of love, not only for his family but for his community. John was born on December 1, 1952 in San Diego, California. In August of 1979 he met his wife Cindy and they were married on February 13, 1983. John was a hard working man and always made sure that he provided well for his family. He spent 15 years with the Crane County Sherriff’s Department and when he was not at work he enjoyed spending his free time with his kids and grandkids. Family meant the world to John.

John was preceded in death by his father, John Marshall Bunyan and his daughter Heather. He left behind his beautiful wife of 38 years, Cindy Bunyan. He also left behind his daughters, Jill Blackshear of Crane, Amanda Salters of Pennsylvania, Shannah & Macie Bunyan of Crane; and his sons Aaron and Eric Bunyan of Crane and his son in laws, Jackie Blackshear and Don Salters. His grandchildren: Deven Garcia, Victoria Lawrence, David Lawrence, Joseph Salters, Katelyn Lawrence, DJ Salters, Jake Salters, Melanie Salters, Zuryna Barrera and Elijah Diaz. His mother Patricia Flair of California and his siblings Stephanie Madsen, Mike Bunyan, and Cheristy Bunyan of California, along with several nieces and nephews.

Memorial services will be held at 11am on Saturday, August 21, 2021, at Shaffer-Nichols Funeral Home.

To order memorial trees or send flowers to the family in memory of Cpl John M. Bunyan, please visit our flower store.