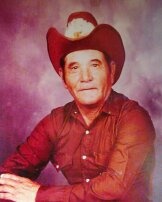 Funeral services will be held at 11:00 AM on Thursday, January 19, 2017, at the Shaffer-Nichols Funeral Home Chapel with Angel Armendarez officiating. Burial will follow in the Resthaven Cemetery.

Claudio was born on January 1, 1937, in Brewster County, Texas. He was a longtime resident of Upton County, living there since he was 11 years old.
He enjoyed working, playing pool and cards. Claudio was a Catholic.
He was preceded in death by his wife, Roberta Barrandy Baiza; and two daughters, Alice Baiza Jaramillo, Claudia Ann Baiza.

Survivors include three sons, Lionel Baiza and his wife, Nelda, Joel Baiza and his wife Crystal, all of Odessa, and Israel Baiza of McCamey; a daughter, Diana Baiza of Fort Stockton; a brother, Adolfo Baiza; two sisters, Leonilla Baiza, and Berta Baiza; 20 grandchildren; and 26 great grandchildren.
To order memorial trees or send flowers to the family in memory of Claudio Baiza, please visit our flower store.