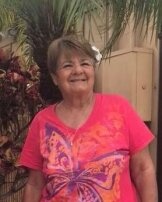 Tina was born on January 10, 1949, in Los Angeles, California. She was a homemaker and a longtime resident of McCamey. Tina married Norman Moody on May 16, 1986, in McCamey, Texas.

She was a member of the First Baptist Church for approximately 42 years. She was active with the McCamey EMS as a volunteer for many years as well. Tina had a heart for giving and was a loyal friend to everyone.
Tina adored her family-especially her children, grandchildren and her great granddaughter. However, Tina and her husband Norman had a fairy tale kind of love that they shared for 32 years.

Tina was preceded in death by her first husband, Ronnie Hazlewood in 1985; her father John Banks; and her mother and step-dad, Teresa and Emil Zwak.

A celebration of Tinaâ€™s Life will be held at 2:00 PM on Tuesday, November 13, 2018, at the First Baptist Church in McCamey with Bryon Bitner and Tandy Adams officiating. Arrangements are under the care and direction of Shaffer-Nichols Funeral Home.

In lieu of flowers, memorials can be made to the McCamey Chapter of the Salvation Army, or to the American Diabetes Association.
To order memorial trees or send flowers to the family in memory of Christina Moody, please visit our flower store.