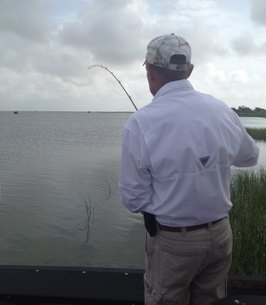 Cecil H. “Bucky” Scarborough passed away peacefully at home on July 3, 2019 surrounded by his family and friends. Bucky was born to William H. “Henry” & Lelia F. Merriman Scarborough on May 19, 1944 in San Angelo, Texas. He lived most of his childhood in Rankin, Texas. He was a 1962 graduate of Rankin High School and went on to attend Texas A&M University, where he sang with the singing cadets and graduated with a Bachelors Degree of Education in 1966. He returned to Rankin and married his high school sweetheart, Jo Lynn “Jody” Steele on September 3, 1966. After a brief stay in Midland, they moved to Crane to raise their family, where he worked as a coach and teacher at Crane High School. He coached the first Crane Ladybirds basketball team. He left the school system in 1976 and began a new career in oilfield trucking, where he eventually retired from Trey Trucks in April of 2018. He was an avid golfer and fisherman. He loved playing in golf tournaments and fishing at the High Bridge and Rockport. He was a member of the First United Methodist Church in Crane, where he loved to sing specials which was his greatest ministry.
Survivors include his wife of 52 years, Jo Lynn “Jody” Scarborough of the home. One son, Lee Steele Scarborough & wife, Mannon of Crane. One daughter, Nola Lynn Rowe & husband, Kelly of Lubbock. Three grandchildren, Harlee Scarborough & Taylor of Odessa, Everett Brewer & Michele of Odessa, Temesha Brewer of Rankin. Fourteen great-grandchildren, numerous golfing, fishing buddies, & Aggies (WHOOP).
A memorial service will be held Monday, July 8, 2019 at First United Methodist Church in Crane, Texas at 2pm. Burial will be at Rankin Cemetery at a later date.
Honorary Pallbearers are Billy Don Brumley, Rudolf Matthaei, Jim Linthicum, Jerry Smith, Jody Garber, Charlie Rolling, Robert Summerfield, and Wayne Smith
The family wishes to thank Brother Paul Thompson & Home Hospice for making this a peaceful transition. In lieu of flowers, donations may be made to First United Methodist Church of Crane, or McCamey & Crane Country Club.

Pop’s Gone Fishin’
I’ve finished life’s chores assigned to me.
So, put me on a boat headed out to sea.
Please send along my fishing pole, for I’ve been invited to the fishin’ hole.
Where every day is a day to fish, to fill your heart with every wish.
Don’t worry, or feel sad for me, I’m fishin’ with the Master of the sea. We will miss each other for a while, but you will come and bring your smile.
That won’t be long you will see, till we’re together you and me.
To all of those that think of me, be happy as I go out to sea.
If others wonder why I’m missin’, Just tell them all,
Pop’s gone fishin’.

To order memorial trees or send flowers to the family in memory of Cecil H. "Bucky" Scarborough, please visit our flower store.