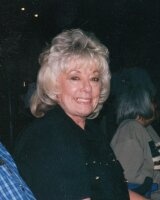 Carlton Elaine Earp Pierce went to be with her Lord and Savior Jesus Christ on Sunday, March 19, 2017. She was 72 years young. Carlton was a lifelong resident of Crane, Texas but had been living in Odessa at Brookdale Sherwood Assisted Living for the last couple of months. She was at Brookdale with family when she left this earth to be with her Savior and family who preceded her in death. Carlton died of natural causes from complications of a stroke she suffered in June 2016. Carlton was known by many names including Mom and Nana by her beloved Grandsons whom were her whole world.

Carlton was born on March 18, 1945, in Odessa, TX to I.C. â€œTinyâ€ Earp and Mildred â€œMimiâ€ Earp of Crane, TX. Carlton had 2 siblings a brother Irving Clifford Earp born in 1946 whom preceded her in death 5 days after his birth and a sister Tinita Earp Cooper of Imperial. TX. She attended Crane High School and graduated in 1963. While in High School, Carlton played varsity volleyball for 4 years winning (2) state championships. She was a vivacious and very caring person as well as a very strong Christian and she never met a stranger. After graduating from High School she attended North Texas State University for one year studying to become a coach.

She married John Edgar Pierce Jr. June 15, 1964 in Acuna Mexico. She and Johnny shared a long and beautiful marriage until his passing in April of 1994. They lived on a Ranch in Crane County and raised their 3 children in the same lifestyle that she grew up with.

Carlton was a Teacherâ€™s Aid in the Kindergarten for many years and retired from there. She eventually went back to work as a Police Dispatcher and 911 operator after the death of Johnny. She retired from the Police Department in 2008 and began taking care of her mother Mimi Earp until her passing.

She is survived by her three children, Jamie Pierce McMeans and husband Scott McMeans of Odessa, Texas, John Carlton Pierce and wife Luz Elena Ramos Pierce of Fort Stockton, TX, and Jana Cathleen Bean and husband Breck Bean of Fort Hancock, TX. She has three Grandchildren Justin Brett Mitchell of Denver, Colorado, Jim Breck Bean of Fort Hancock, TX and John Clayton Pierce of Denton, TX. She has three Step-Grandchildren Justin McMeans of Crane, Shane McMeans of Crane, and Ashleigh DeGraffenreid of Stamford, TX and 2 Step-Great-Grandsons, Ryan and Jaxon McMeans. She is also survived by her sister Tinita Earp Cooper and husband Ronnie Cooper of Imperial, TX. Carlton has several nieces and nephews she is survived by as well.

Carlton was preceded in death by her husband John Edgar Pierce, Jr. April 4, 1994, her brother Irving Clifford Earp July 23, 1946 and both of her parents.

The service will be held in Crane, TX at the First Baptist Church on Tuesday, March 21st at 2pm followed by graveside services at the Crane Cemetery. Visitation will begin Monday, March 20th at noon at the Shaffer-Nichols funeral home in Crane followed by a viewing from 6-8pm that evening with family members. In lieu of flowers the family asks that you make donations to Cal Farley Boys Ranch in Amarillo, TX. The family would also like to thank the wonderful, caring, and Christian people at Brookdale Sherwood who helped take care of Carlton during her last couple of months.
Arrangements are under the care and direction of Shaffer-Nichols Funeral Home.
To order memorial trees or send flowers to the family in memory of Carlton Pierce, please visit our flower store.