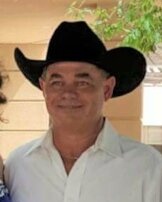 November 30, 2017, Billy Neal Lynch went to be with his Heavenly Father. He was born in Rankin, Texas on November 4, 1973 to Billy Leon Lynch and Gail Lorraine Kennedy.

He married Troya Ann Pippen in August of 1998 and together they have 3 children. Kayla Victroya (18 yrs), Tristan James(14 yrs), and Stetson Luke Bailey (18 months).

Bubba Neal is survived by 4 sisters; Kelly Kay Lynch of McCamey, Kristy Gail and Lance McDonald of McCamey, Kara Elaine and Joe Trevino of Andrews and Rachel Tarin-Lynch of Midland and his step mother Darcey Harris-Lynch of McCamey.
He was also fun Uncle Billy to nieces and nephews; Landon and Tanner Valdez, Colby, Carter, and Chloe Hazlewood, Shelton, CheyBree, Makayla McDonald, Bailey and Lynzi Tarin, and Lainee, Jaxon, Joe Angel, and Jeremiah of Andrews.
He is also survived by his favorite/ most loyal, Uncle Coy Lynch, along with and his dearest friend and â€œBossâ€, Ernest Woodward and countless cowboys and cowgirls who think of him as their best friend for life.
Billy was preceded in death by his parents.

Billy Nealâ€™s greatest loves in life were his children and their mother. He also loved God, and always had a kind word to say. He found happiness with his job as Ranch Manager and could fix anything. He loved the raw untamed beauty of nature. He was fearless and brave.
Billy Neal Lynch was a true free spirited cowboy.

A visitation will be held from 4-7 pm on Sunday, December 3, 2017, at the Shaffer-Nichols Funeral Home in McCamey. Funeral Services will be on Monday, December 4, 2017, at the First United Methodist Church of McCamey. Burial will follow at Horsehead Crossing in Pecos County (primitive roads).
In lieu of flowers donations will be accepted through fund for his children at Wells Fargo Bank account Troya A. Lynch Routing number 111900659 account number 1525853261.
To order memorial trees or send flowers to the family in memory of Billy Lynch, please visit our flower store.