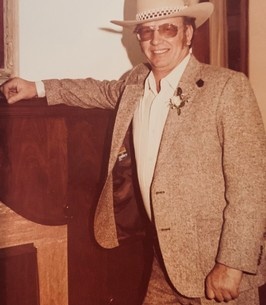 Born January 23, 1934 in Dumont, Texas, Billy “Bill” Joe Conn was the oldest of 9 children to parents, Venus and Bill Conn. He grew up in the panhandle and not only went to high school with Buddy Holly but also with the love of his life, Davene Sides. The two married in 1951 and in subsequent years had 5 children together: Vicki Lynn, Beverly Jo, David Mark, Lorri D’Ann and Sam Jon. When they moved to Iraan in the late 70s, the couple found their forever home. Around town, Bill became known for his sense of humor, kind heart and love of poker. He was also a fan of westerns, horse racing and sports — especially Iraan football and the Dallas Cowboys. More recently he enjoyed driving around town in his blue Caddy, meeting up with “senior citizens” at the café & talking politics with anyone who would listen.

To order memorial trees or send flowers to the family in memory of Billy Joe "Bill" Conn, please visit our flower store.