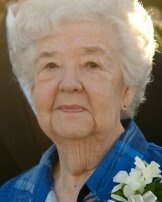 Our mother, grandmother, and great grandmother, Bettye Sue Low Ratliff, of Big Lake, Texas, departed this life to rejoin her husband, Lester, at the gates of heaven on January 27, 2016.

Bettye was born in Jones County on January 22, 1927, to Homa Low and Helen Myatt Low. She began school in Hamlin, attended second through fourth grades in Haskell, and spent the rest of her school years in Garden City. Bettye's first husband and the father of her son, John Ray Cox, was killed in World War II. On September 22, 1946, Bettye married Lester Ratliff, with whom she enjoyed sixty-nine years of love and devotion. They were blessed with two more sons, James William and Michael Lester.

The couple lived in Garden City until 1950 when they moved to the Texon ranch. Bettye was very busy as a mother and homemaker while her sons were growing up. She eventually went to work for Reagan County ISD as the superintendent's secretary to help with the boys' college expenses.

Bettye enjoyed socializing with friends and family. She and Lester helped host the Big Lake New Year's Eve dance for many years, usually having a pre-party at their home. She was an excellent cook and hostess, and always liked having company. Bettye was an accomplished bridge player achieving master status. She loved all card games and was delighted to teach her grandchildren how to play them. Meals at Nana's and Granddad's were quickly followed by hours of fun playing games. Bettye was a doting and supportive grandmother who took great pride in her grandchildren's accomplishments.

Bettye absolutely loved travelling, and she was always â€œready to goâ€ just about anywhere. She attended commissioner conventions and livestock conventions with Lester and helped her sister and brother-in-law with a booth at numerous orthodontist conventions. She and Lester spent many happy summer vacations in Ruidoso, New Mexico, in the company of dear friends. They took numerous cruises and agricultural tours in many parts of the world. They travelled extensively in their RV and became part of a group of lifelong friends and travelling companions. Bettye always kept a bag packed and in the car just in case a day trip might turn into an overnight one.

After many years of living on the ranch, Bettye and Lester moved into their new home in Big Lake to spend their golden years. In her community, Bettye was a member of the First United Methodist Church, the Garden Club, and Trail Blazers. She enjoyed going to lunch with â€œthe girlsâ€ and water aerobics at the fitness center.

Graveside services for Bettye will be conducted on Saturday, January 30, 2016, at 2:00 p.m. at Glen Rest Cemetery in Big Lake by the Reverend Larry Young. Arrangements are under the direction of the Shaffer-Nichols Funeral Home in Crane.

The family wishes to express special thanks to all the staff of the Reagan County Care Center and Hospice of San Angelo for their excellent care, kindness, and compassion.

Memorials may be given to the First United Methodist Church of Big Lake or Hospice of San Angelo.
To order memorial trees or send flowers to the family in memory of Bettye Ratliff, please visit our flower store.