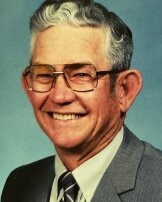 Bennie Joe Morrison, 83 of Crane, Texas, went to be with his Lord and Savior on Wednesday morning October 31, 2018, in Crane.

Bennie Joe was a member of the Masonic Lodge, Scurry # 706. He served on the Crane ISD School Board for 14 years until he and Shirley moved to Big Spring, Texas and later to Ira, Texas. He worked in the oil
field all his life, but his favorite past time was hunting, fishing and enjoying his family.

Graveside services will be held at 11:00 am on Saturday, November 3, 2018 at the Crane County Cemetery with Reverend David Evans officiating.
Arrangements are under the care and direction of Shaffer-Nichols Funeral Home.
To order memorial trees or send flowers to the family in memory of Bennie Morrison, please visit our flower store.