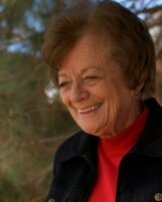 Barbara Sue (Odom) Wheeler, age 81, a lifetime West Texan passed away peacefully from this life surrounded by her family on November 26, 2017, after a very brief illness in Rankin, Texas. Barbara was born on August 7, 1936 in McCamey, Texas to parents Otis and Mabel Odom. In addition to her loving duties as Wife and Mother, Barbara was a beloved merchant in Rankin for many years and a valued employee of Union Texas Petroleum and Western Gas.

Barbara met the love of her life, Charles A. Wheeler, in 1955 and their love and devotion to each other served as a model for family and friends alike for over 54 years. Charlie and Barbara raised two sons in Rankin while they owned and operated several businesses, including Johnsonâ€™s Department Store, where their family made friends with many people in the surrounding area. In recent years, Barbara volunteered at both the Rankin Museum and the West Texas Food Bank in Rankin. In the last few years of Charlieâ€™s life, he and Barbara traveled extensively in their RV fifth wheel, taking two trips to Alaska as well as Nova Scotia and practically everywhere in the continental United States.

She is survived also by a brother George T. Odom of Belton and by numerous loving brothers and sisters-in-law, nieces, nephews, cousins and friends. She was preceded in death by her parents and by her husband, Charles A. Wheeler.

A graveside service will be held at 10:00 a.m. on Wednesday, November 29, 2017 at Rankin Cemetery under the direction of Shaffer Nichols Funeral Home in Crane. In lieu of flowers, the family requests that memorials be made to either:
West Texas Food Bank
For Rankin, Texas
PO Box 4242
Odessa, TX 79760
wtxfoodbank.org