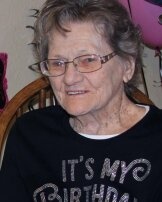 Barbara Lue Stroud Weaver, age 91, was welcomed into eternal glory, as she peacefully left this life on the morning of January 7, 2018, surrounded by her loving family.

She was born January 6, 1927 in Olney, Texas to Lottie Grimmett Stroud and Charles â€œCharlieâ€ Stroud. She was the oldest of three girls. Growing up in the East Texas oilfield, she lived in Turnertown and Henderson. She graduated from Gaston High School in Joinerville in 1944. Barbara then attended Tyler Texas Business Institute. She worked at the Richardson Company and Montgomery Wards as a bookkeeper while living in Henderson.

On July 2, 1949, she married the love of her life, James Thomas Weaver of Oakhill, in Selmon City. They later moved to Snyder, Texas, then eventually moved to Midland and Odessa where they started a family. Five years after marriage, a daughter, Bobbie Carala, was born and two years later a son, James Thomas, Jr. â€œJimâ€ came along. In 1956, her husband was transferred to Rankin, where they spent the rest of their lives together.

After raising her children, Barbara returned to work as a bookkeeper for L.E. Windham Oil for a while before becoming self-employed. Barbara and her husband became owners and operators of Rankin Tank Rental and Equipment and Bernie Phillips Well Service.

Barbara loved camping and the outdoors, especially Lake Brownwood where the family spent most vacations. She also loved building things with her hands, including woodworking. She was a woman of many talents, building and making numerous things for her daughterâ€™s classroom, including a reading loft that hundreds of children enjoyed and still remember years later.

She was a loving wife and mother, a sweet and fun grandmother, and a caring and precious great and great-great grandmother. These children were her pride and joy until the day she died.

After losing her husband, she moved to Iraan to be closer to family.

She leaves behind her daughter, Bobbie Johnson and husband Keith of Iraan; grandson, Keith Johnson, Jr. and wife Misty of Greenwood and their children, Jacob, Asher, and Madison; great-great grandson, Maddox of Greenwood; a granddaughter, Lauren Kent and husband James, Jr. of Iraan and their son, Colton; sister Evelyn Green and husband Gerald of Henderson, Texas; daughter-in-law Monreen Weaver of Odessa, and many nieces and nephews in Henderson.

A memorial service will be conducted by Pastor James Kent, Sr. in Iraan at the Iraan Community Church on Saturday, January 27 at 2:00.

I am hard pressed between the two. My desire is to depart and be with Christ, for that is far better. But to remain in the flesh is more necessary on your account.
Philippians 1:23-24
To order memorial trees or send flowers to the family in memory of Barbara Weaver, please visit our flower store.