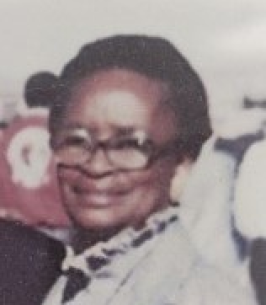 Barbara Virginia Brown Spratt was born in Cleburn, Texas, but was one of the early settlers of West Texas. Barbara grew up at the Santa Rita oil camp in Reagan County. In 1935, Barbara’s parents, Jay and Lillie Bell Brown, built a house in McCamey, TX so that Barbara and her 3 siblings could attend the new Dunbar School for Black children. Lillie Bell and the children would live in McCamey on weekdays for school and commute back to the oil camp on weekends. Barbara’s Dad continued to work in Santa Rita for Continental Oil Company until retiring in 1950 then moving full time to McCamey.

Barbara married Roy Spratt and they had one child, Lorenzo Spratt. Barbara was very proud that she and her son, Lorenzo, both graduated from Dunbar High School. Barbara was a homemaker and always taught her family to take pride in their hometown and give back to the community. Barbara led by example with her own community involvement. She was active in the Dunbar PTA, the American Legion Auxiliary, and the Social, Civic and Art Club of McCamey. She was also a long time member of South Union Baptist Church. Barbara leaves behind her teachings and legacy to: Son, Lorenzo Spratt (wife – Gwen Spratt) of Dallas, TX; Granddaughter Melanie Spratt of McCamey, TX; Grandson, Dalen Spratt (wife – Stacy Spratt) of Atlanta, GA, and Great grandaughters Ava Anderson, Julia Anderson, and Axel Spratt.

To order memorial trees or send flowers to the family in memory of Barbara Spratt, please visit our flower store.