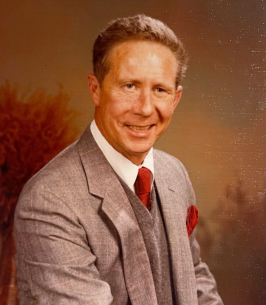 On December 10, 1940, Ray Workman and Hollis Mitchell Workman welcomed their fifth child into this world. They named him Arthur Reed (Butch ) Workman. They would go on and welcome five more children into their family. Ray and Hollis were both from farming families, and each of their children had a role in helping their mom and dad make a living from the land. Butch especially enjoyed working in the soil, and loved to pick up a handful of it and smell it. He said you could tell a lot about the yield of the crops from the smell of the dirt. All of the children had one common chore they disliked the most – picking up rocks from the plowed ground, throwing them in the back of a pick up and hauling them away. In the beginning, they picked cotton boles by hand, putting them in burlap bags that trailed behind them tied to their shoulders. Butch said they were in “high cotton” when Ray was able to buy a cotton harvester machine to pull behind their tractor. They also raised maize and grew all their own vegetables, raised chickens and other animals to feed their large family of 12.

Butch moved to Crane in 1964 and in 1966, he married Donna Seabourn. Butch drove a truck for R. R. Kennedy working in the oil field. In 1970, he went to work for Jay Hughes and Steve Holifield in their new business, Trey Trucks, Inc., and in 1976, he and his wife Donna ventured out on their own to start GARD Trucking, Inc. On March 24, 1982, Butch was involved in a one-car accident on his way back to Crane from Sheffield, Texas. He suffered traumatic brain injuries and multiple other injuries. In 1985, it was necessary that he be treated in a brain trauma facility in San Marcos, Texas. He did well in their structured environment and lived a really good quality of life. His wife and children continued their relationship with him regularly. He was truly loved by the staff at Rehab Without Walls and would beat anyone and everyone at dominoes and other favorite games. In 2019, Butch started displaying significant loss of his neurologic function, and on April 5, 2022, he left his worldly body behind and received a brand new one in heaven. Donna was by his side for the last three days of his life, stating that she had started this journey with him 40 years ago and that she would finish this journey with him, right by his side. He was loved dearly.

Butch is survived by two sons, Robert Workman of Houston, Texas, and Gregg Workman and his wife Elisa of Brenham, Texas. He has 3 beautiful grandchildren from Robert, Ashlyn Pugh and husband Brock and Luke Workman. Gregg and Elisa blessed him with 4 more beautiful grandchildren, Samuel, Gabriela, Emma and Sofia. His daughter Angie, left this world from a car accident at the age of 19, and was waiting with open arms to welcome him when he joined her Tuesday evening. He is also survived by three sisters, Ruby Redman of Abilene, Texas, Myrtie Bales of Ballinger, Texas, and Dorothy Wadsworth of Ballinger, one brother, David Workman, also of Ballinger. He was preceded in death not only by his daughter, but also his father Ray and his mother Hollis, four brothers, James, Dean, Jimmy and Shorty, one one sister, Mary Piel.

Services are entrusted to Shaffer Nichols Funeral Home. Visitation will be Friday evening from 6:00 P.M. to 8:00 P.M. Graveside services will be at 3:00 PM on Saturday, April 9, 2022, at Crane County Cemetery.

To order memorial trees or send flowers to the family in memory of Arthur "Butch" Workman, please visit our flower store.